Stock Market Corrections: Not As Scary As You Think

For individual investors, 2017 was a dream. However, 2018 has been a different story. After a record setting start to the year, the tides turned quickly on the unprecedented market run. During a short 13 day window from late January and early February the Dow and S&P 500 tumbled into official correction territory, marking the first correction investors had witnessed in two years. The result? More investor fear (as measured by the CBOE Volatility Index) in almost a decade.

Just as we have seen during previous market corrections, many individual investors sell when the market declines out of fear it will never come back. However, the opposite is actually true. Not only will the market come back, but it will do so a lot sooner than you might think. While some experts are predicting there are more corrections ahead, the reality is we can’t predict the future. But we can certainly use the past to help inform how we think about market corrections. So in this post we’ll present data on how market corrections work so you can come in off the sidelines and keep investing in your future.

You Won’t Be Waiting Long

Because the market was on a tear, investors have been sensitive to any downward trends. So when the latest stock market correction — defined as a peak-to-trough decline of at least 10% — occurred on February 8, 2018, it sent shockwaves. The result has been fear and uncertainty, and many investors pulling the money out of the market or keeping their money in savings while they wait it out. But just how long should this last? 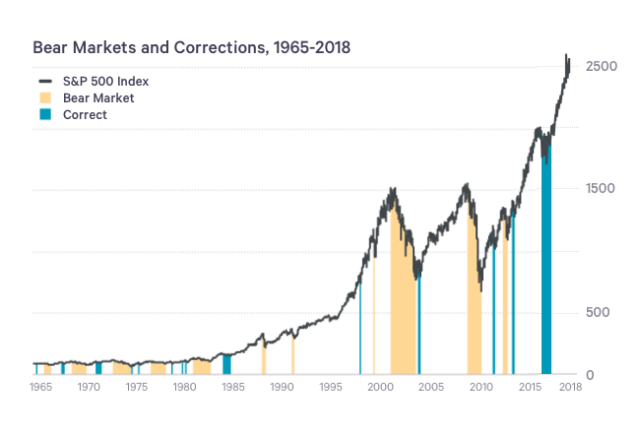 The table below displays the size of each correction and the amount of time it took the market to recover, or the time it took to return to the price achieved at the peak: 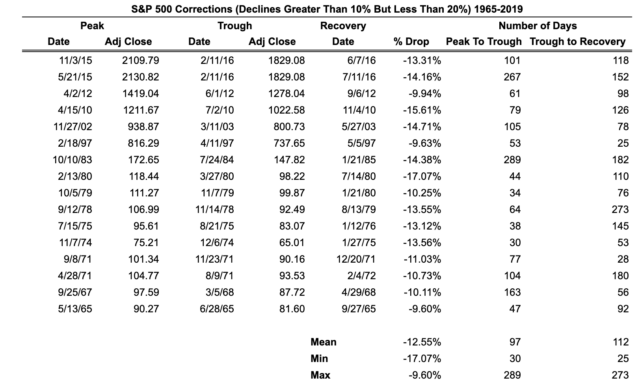 As you can see the mean time to recovery was only 112 days, which isn’t that long of a time to exercise patience when you’re investing for the long-term. Interestingly, it took on average around the same amount of time to recover as it did to decline. Yet numerous research organizations, most notably DALBAR, have found that individual investors consistently run for the exits whenever the market drops, which on average costs them 4% per year.

Unfortunately bear markets take much longer to recover. But the good news is they do recover — you just have to have more patience versus corrections, which historically have taken about the same amount of time to recover as they did to create their maximum losses. The mean time to recovery for bear markets is 702 days, which is nearly twice as long as it took to reach a trough. But keep in mind the average was highly influenced by the six years it took to recover from the bear market in the 1970s. 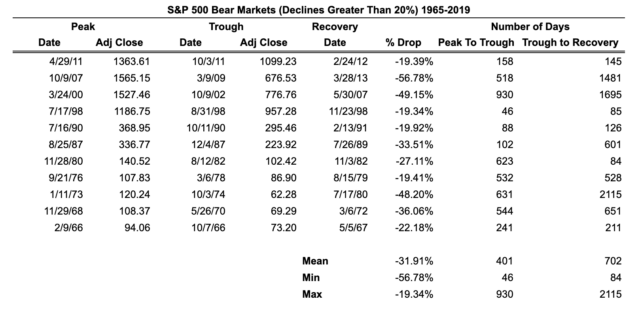 Your Superpower: Staying the Course

If you plan on saving over the long-term even a bear market shouldn’t stop you from consistently adding to your investment account. In fact, investing in a bear market can actually increase the value of your holdings at retirement because, in effect, you get to buy at a discount all along the way. To put it another way, if an investor started investing on January 1, 1965 and endured all of the corrections and bear markets over the next 50+ years they would have seen a compounded return of 6.7%, far in excess of the compounded inflation rate of 3.6%. But human nature is tough to overcome, so while ignoring market corrections and bear markets and staying the course is the right thing to do, it doesn’t necessarily feel that way when markets are volatile. So our advice: use data to guide your decisions, and remember: slow and steady wins the race.

Wealthfront prepared this post for educational purposes and not as an offer, recommendation, or solicitation to buy or sell any security. Wealthfront and its affiliates may rely on information from various sources we believe to be reliable (including clients and other third parties), but cannot guarantee its accuracy or completeness. See our Full Disclosure for more important information.

The S&P 500® is an index of 500 stocks seen as a leading indicator of U.S. equities and a reflection of the performance of the large cap universe, made up of companies selected by economists. The S&P 500 is a market value weighted index and one of the common benchmarks for the U.S. stock market. The S&P 500 is a product of S&P Dow Jones Indices LLC and/or its affiliates and has been licensed for use by Wealthfront. Copyright © 2015 by S&P Dow Jones Indices LLC, a subsidiary of the McGraw-Hill Companies, Inc., and/or its affiliates. All rights reserved.

Celine is Wealthfront’s research scientist and works on a wide range of projects and in-depth quantitative data analysis. She applies her econometric expertise to developing and improving investment strategies and research infrastructure. Among Celine's other work prior to joining Wealthfront was a stint as an intern at Parametric Portfolio Associates where she formulated tax sensitive trade strategies, performed scenario analysis and built a tax-managed portfolio simulator in R. She earned her PhD in Financial Economics from the University of Washington where she also earned her MBA and Computational Finance Certificate. She received her MS in Statistics from Syracuse University and BS in Mathematics from the University of Science and Technology of China. Andy is Wealthfront’s Executive Chairman. He serves as a member of the board of trustees and vice chairman of the endowment investment committee for University of Pennsylvania and as a member of the faculty at Stanford Graduate School of Business, where he teaches courses on technology entrepreneurship. Prior to Wealthfront, Andy co-founded and was general partner of Benchmark Capital, where he was responsible for investing in a number of successful companies including Equinix, Juniper Networks, and Opsware. He also spent ten years as a general partner with Merrill, Pickard, Anderson & Eyre (MPAE). Andy earned his BS from University of Pennsylvania and his MBA from Stanford Graduate School of Business. He has frequently been named to Forbes magazine’s The Midas List as a top tech venture investor. View all posts by Celine Sun, PhD and Andy Rachleff