At Wealthfront we pride ourselves on our data-driven analysis that debunks personal finance advice that is commonly believed to be true. An immensely popular belief promoted by the investment community with which we disagree is individual investors need  a financial advisor to keep them invested in down markets. This view is consistent with repeated research which shows the average  individual investor is likely to sell when markets drop, which results in a decrease in annual returns of 4%.

To prove our point we will present three sets of data:

Passive Investors Are Less Likely to Withdraw in Bad Markets

In the chart below we display the aggregate redemption rates from all mutual funds and index funds compared to the performance of the US stock market as represented by the S&P 500. The redemption rate we used is the so-called “Narrow Redemption Rate,” which is defined by the following formula: Fund shares redeemed excluding those redeemed into a similar fund/Average net assets for the unit period. 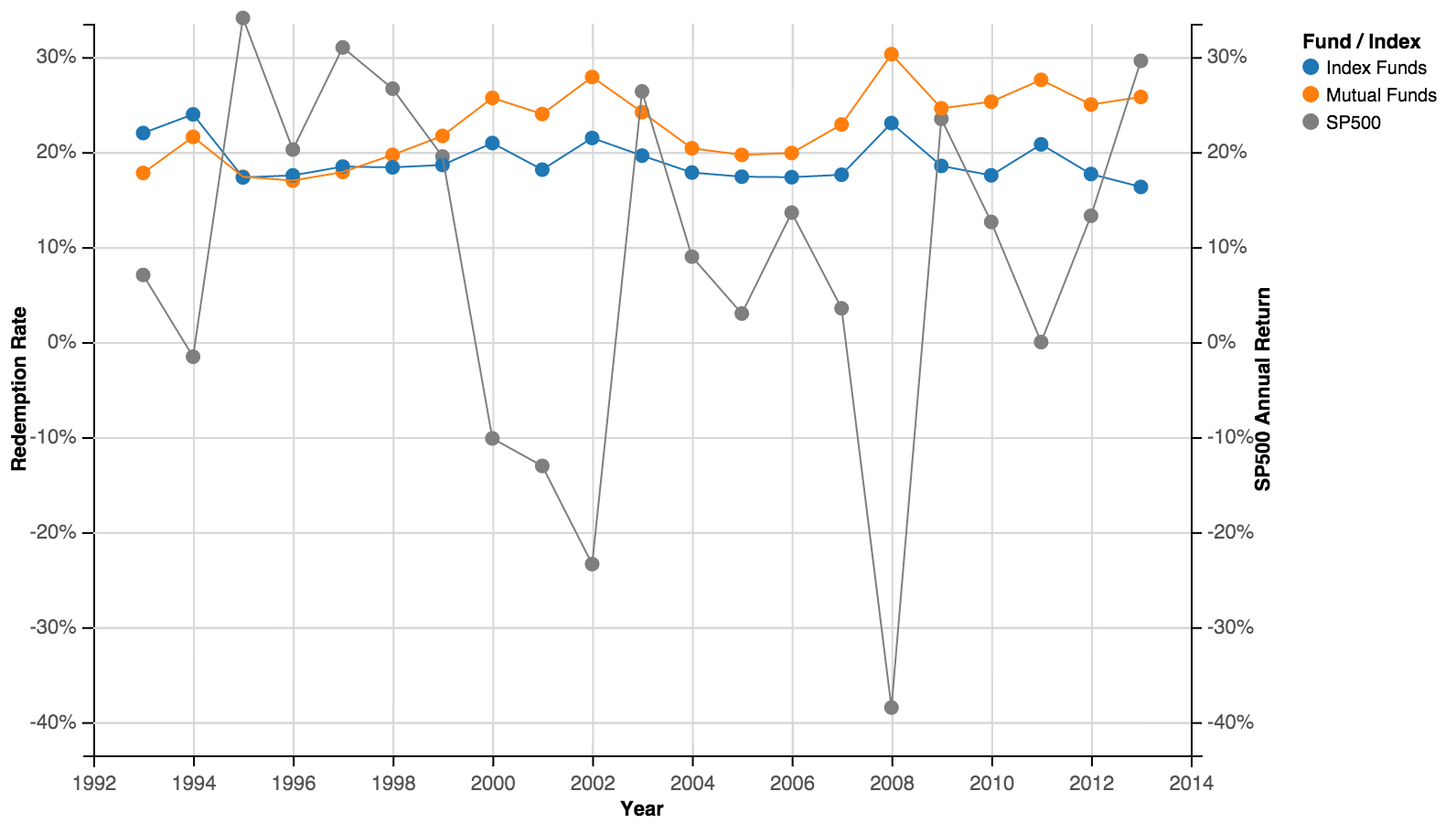 Redemptions from both types of funds are correlated with stock market performance, but index fund withdrawals are far less sensitive to the behavior of the US stock market than mutual fund withdrawals and the difference is statistically significant. That means the probability of the two behaviors being different is greater than 99%.

The difference in behavior can also be seen in the following graph, which plots redemptions against S&P 500 returns: 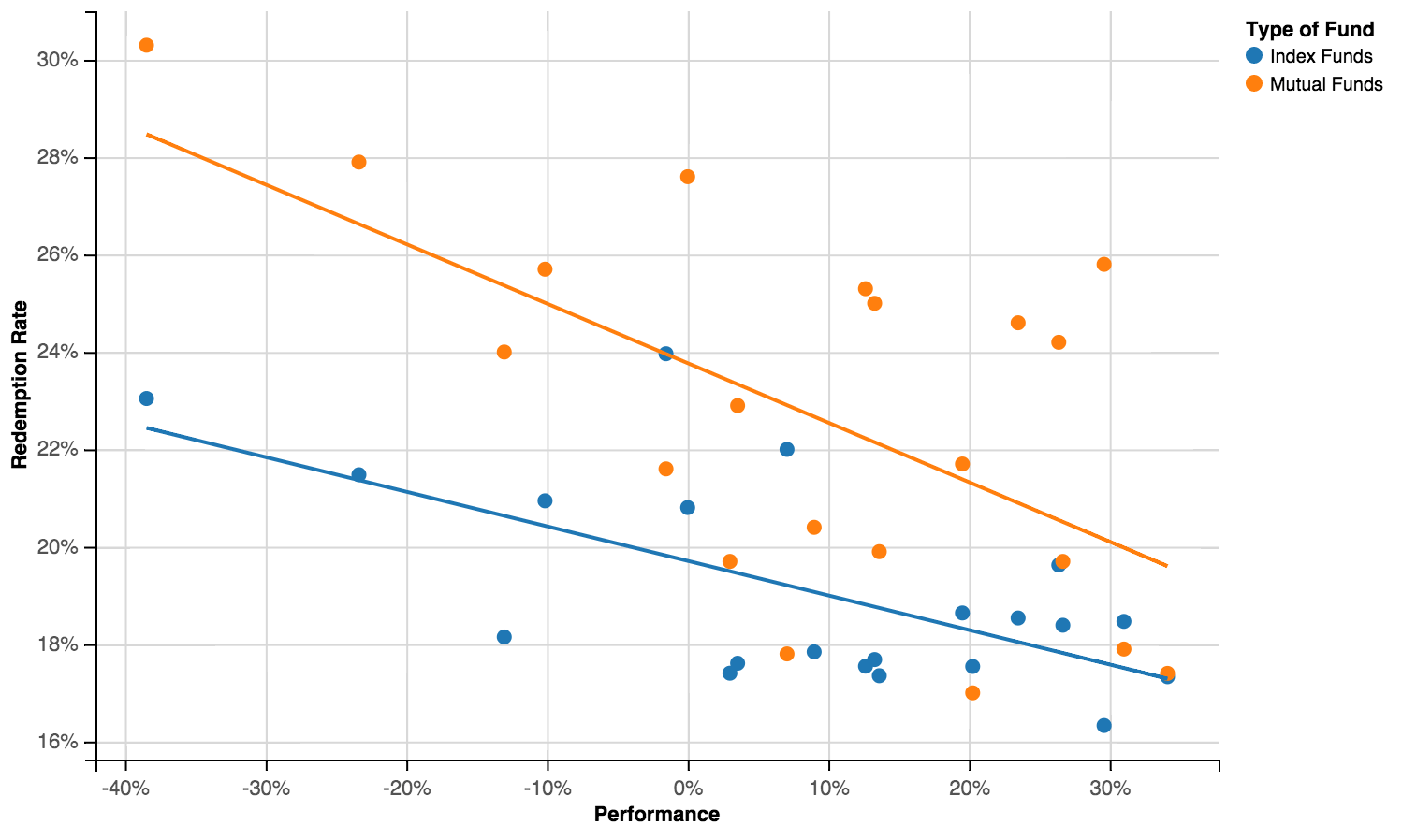 Our conclusion is passive (index fund) investors are far less likely to withdraw from the market when it declines than actively-managed mutual fund investors because, by choosing a passive investment strategy, they fundamentally believe it’s not worth trying to time the market. We believe this is especially true among younger investors, the vast majority of whom appear to have placed their savings in passive rather than active investment strategies.

Wealthfront Client Withdrawals Are Uncorrelated to the Market

Our hypothesis that young people are far more likely to stay invested in bad markets is born out by the withdrawal behavior of Wealthfront clients, who are typically very young by investment standards (average age is 32). As you can see from the graph below there is no pattern or correlation between Wealthfront client withdrawals as a percentage of our assets under management over the past 128 weeks and the performance of the S&P 500. 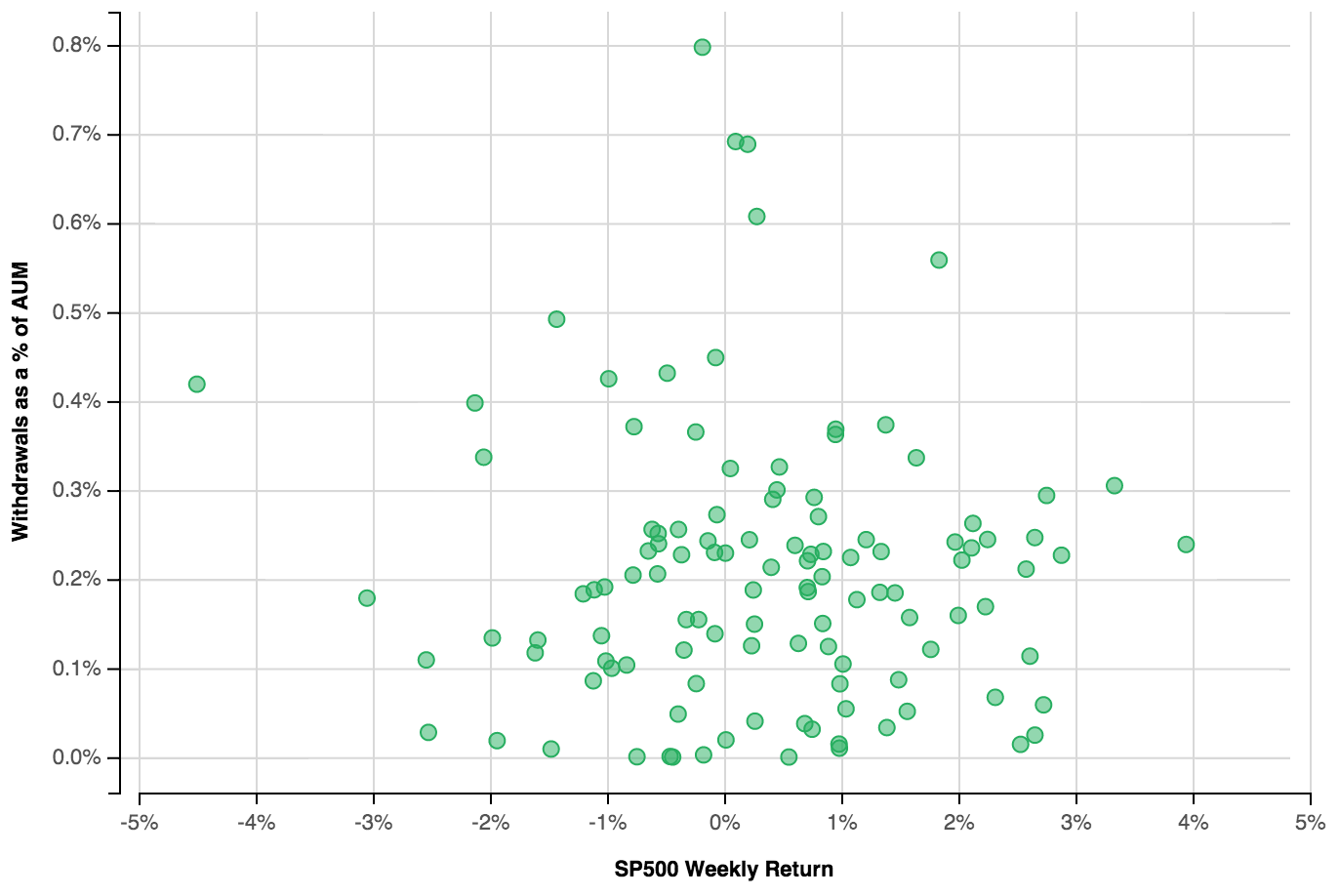 Statistical analysis confirms there is no relationship between Wealthfront client withdrawals and market performance. The R2 is only 0.002 and the coefficient p-value is 0.662 which is not statistically significant.

Based on interaction with our clients we know the vast majority of withdrawals from Wealthfront (measured in dollars) were actually driven by the need for a down payment on a house. We believe this reflects the millennial bias in our client base (greater than 65% of our clients are 35 or younger). Overall, our annual churn rate is less than 2% of assets under management, which compares favorably to Charles Schwab’s claim that the average churn rate for their affiliated financial advisors is 2.8% (almost 50% higher!).

The lack of a relationship between Wealthfront client withdrawal activity and market performance is reinforced by our client service activity. As you can see from the graph below, the frequency of emails to our client service department is completely unrelated to market performance. We chose to start our data set (a total of 120 weeks) for this analysis three months after initiation of our services because it took three months after launch for the data to get to a state that was comparable and consistent. The R2 for the regression of service request emails and the S&P 500 performance is only 0.008 and the coefficient p-value is 0.320, which means there is no statistical correlation. 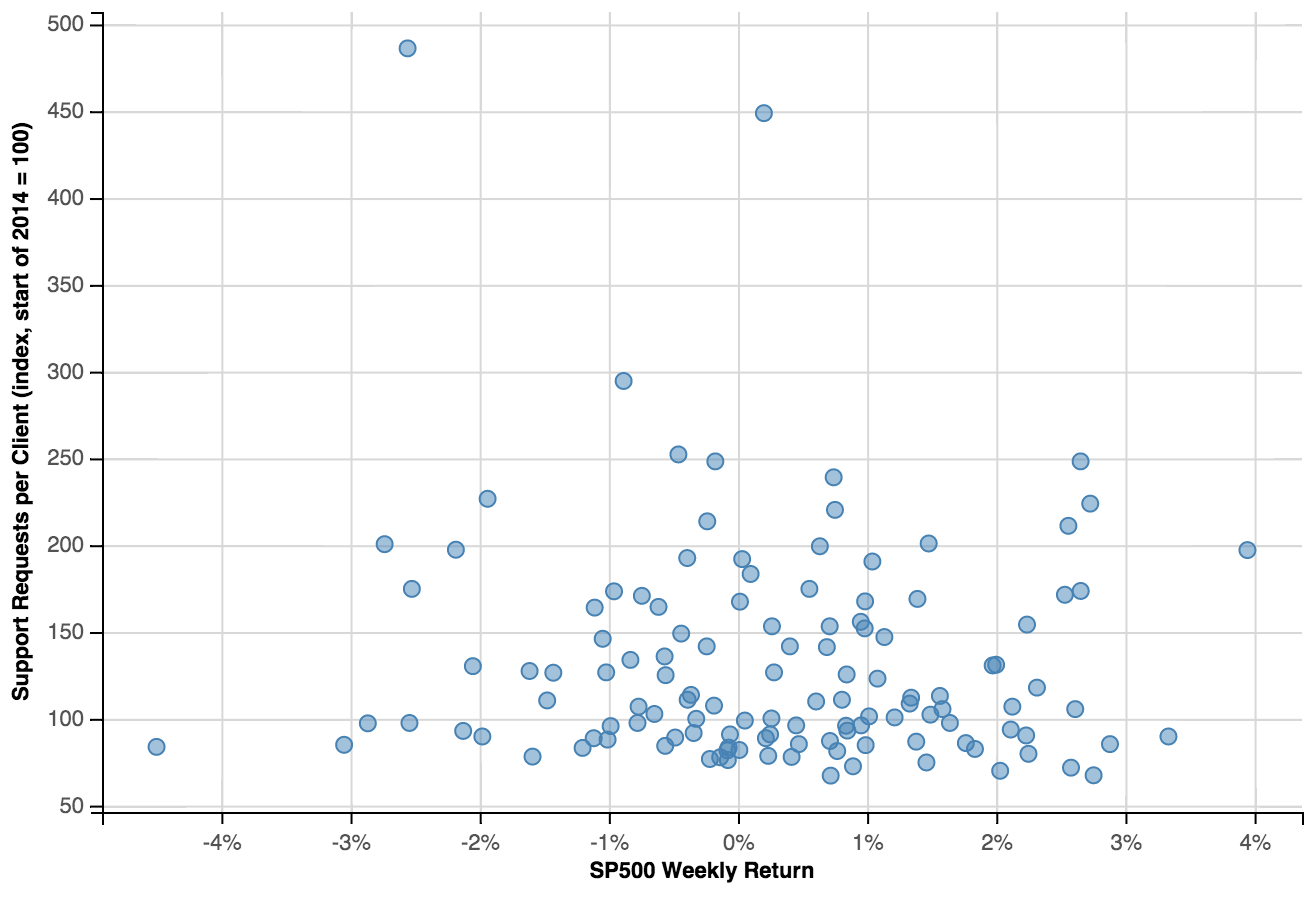 The only relationship we have noticed is an increase in the level of email and call activity around our major corporate announcements (financings, new products, etc.) and the deadline for opening an IRA each April. You can see the spike in client service activity each April in the time series version of the data below: 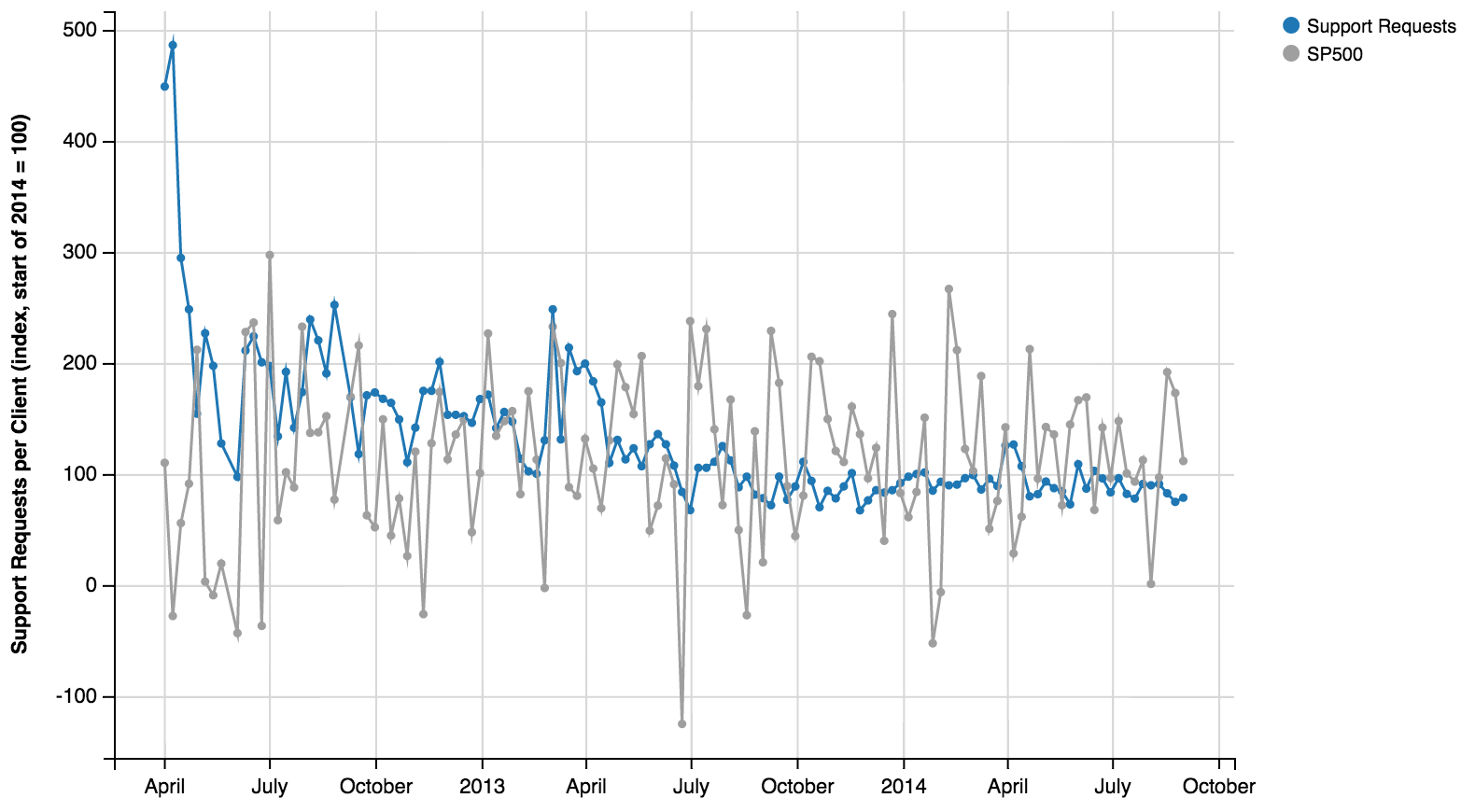 You will also notice a decreasing trend in the number of client service emails/client over time due to improvements we make to our software that address frequent client service requests. This is unrelated to market performance.

We think a number of our assertions are likely to ruffle the feathers of many in the traditional investment industry, which believes everyone needs a financial advisor to keep them invested in bad markets.

We know naysayers will claim our analysis, especially as it relates to Wealthfront clients, evaluates too short a period from which to draw a conclusion and can’t be valid because our clients have yet to experience a sustained downdraft in excess of 10%. Our analysis covers 128 weeks, which is statistically adequate for showing the lack of correlation between withdrawal behavior and market performance. If the choice of time period was too short then we shouldn’t have seen statistical significance in the correlated behavior over the same time period between mutual fund investors and the S&P 500.

Critics of our analysis will claim you need an advisor to talk you off the ledge when the market declines to keep you invested in the market. Our favorite response to this claim was a quote from Cory Banks, formerly a reporter at ETF Report (now ETF.com), when he visited us in January 2012:

“You are unlikely to need to talk someone off the ledge if you didn’t talk them onto it in the first place.”

Unlike traditional financial advisor clients, our clients opt into our service without any prodding. They typically have arrived at the conclusion that they should just invest in a diversified portfolio of index funds and deal with the market vagaries (i.e. don’t sell when the market declines) before they open an account. That’s not to say Wealthfront won’t incur client churn if the markets take a significant and prolonged plunge. We just think the data presented above supports our theory that we will likely observe a lower churn rather the investment industry’s prediction that Wealthfront will incur a higher than average churn in such an environment. Our hypothesis is bolstered by our much lower current annual churn rate relative to the aforementioned industry averages.

We are confident our churn rate will continue to be lower than that of traditional advisors. In addition to benefiting from clients who are strong believers in passive investing and adherents to its mantra of not trying to time the market, Wealthfront diversifies across more asset classes than the typical advisor and, most importantly, offers tax-loss harvesting at low account minimums. Today, our tax-loss harvesting accounts represent more than 60% of our more than $1.4 billion under management. We believe the popularity of tax loss harvesting among our clients is likely to lead Wealthfront to compare even more favorably on an after tax return basis to traditional investment management services in bad markets (which should lead to lower relative churn).

A final critical claim we expect to hear is that smaller accounts, of the size Wealthfront typically manages, are more likely to churn in bad markets because smaller investors are less able to handle a down market and are therefore more likely to withdraw. Our churn to date has primarily been in our less-than-$10,000 free trial accounts, which represent a very small percentage of our assets under management.

We don’t doubt that many people, especially those who are older, want  reassurance from an advisor when markets trend down. The issue is whether they need  reassurance. Our data statistically proves that young investors who have chosen the index fund route are much less likely to withdraw in down markets than investors who have chosen the active portfolio management route. We believe that most people, by virtue of their age, would benefit from a relationship with a financial advisor, but that doesn’t necessarily mean they need it to stay invested in down markets.

Andy Rachleff is Wealthfront’s Executive Chairman. He serves as a member of the board of trustees and vice chairman of the endowment investment committee for University of Pennsylvania and as a member of the faculty at Stanford Graduate School of Business, where he teaches courses on technology entrepreneurship. Prior to Wealthfront, Andy co-founded and was general partner of Benchmark Capital, where he was responsible for investing in a number of successful companies including Equinix, Juniper Networks, and Opsware. He also spent ten years as a general partner with Merrill, Pickard, Anderson & Eyre (MPAE). Andy earned his BS from University of Pennsylvania and his MBA from Stanford Graduate School of Business. He has frequently been named to Forbes magazine’s The Midas List as a top tech venture investor. Roberto Medri, Wealthfront's Principal Data Scientist, has a penchant for improving decision making by means of the scientific method. Before joining Wealthfront, Roberto led the marketing and data analytics teams at Etsy, where he was the first data-focused hire. Roberto holds an MBA from The Wharton School at the University of Pennsylvania, where he was named a Palmer Scholar. Roberto started his career as a consultant for Bain & Company after getting a BA in economics and an MA in classics and film from Bocconi University in Milan. Roberto grew up in Lake Como, Italy. View all posts by Andy Rachleff and Roberto Medri