A Decade After the Crash, Wealthfront Clients Are Surprisingly Hopeful for the Future

Wealthfront surveyed more than 1,000 clients to understand how millennials felt about their financial futures 10 years after the Great Recession. We found that despite stalled careers and anxiety about the economy, many millennials still feel successful and "on track" to meet their financial goals today.

Millennials came of age during the Great Recession of 2008, a time of economic turmoil, angst, and doomsday headlines blaring bleak futures. Now that a decade has passed, we wanted to check in to understand the impact the financial crisis had on our clients. We surveyed more than 1,000 clients* and conducted a number of in-depth interviews to determine how millennials feel about their financial futures.

While more than one-third (36%) of clients claim the financial crisis changed their career path and slowed their professional growth, the majority (77%) believe their current career is setting them up for long-term success. This is counter to the often-recycled narrative that all millennials are living in their parents’ basements or feeling stalled. Many, in fact, are thriving — though for some their path to success hasn’t been the most conventional. 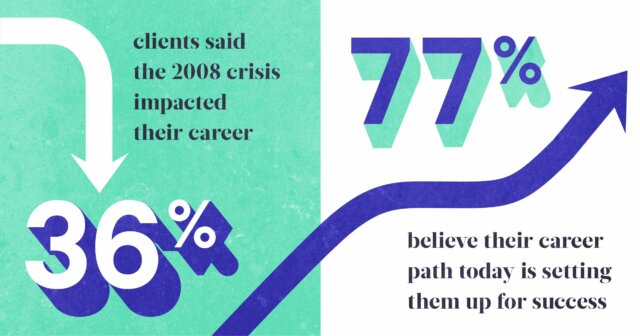 Wealthfront client Anna Krishtal is one of those people. Instead of getting a job after graduating in 2008, she earned a master’s degree and traveled abroad, eventually blending her passions of education and travel to become an internship coordinator for international students.

She says the market crashing pushed her to seek an alternate route. “I actually don’t think I’d be where I am today were it not for the financial crisis,” she says. “I don’t think that I would have believed that the life I’m living now was possible.”

Like Anna, many of our clients had to take alternate routes due to the recession, but most of them have one thing in common: rather than let the financial crisis derail their dreams, they actually became more ambitious and more future-oriented. They educated themselves and created solutions to their challenges. They redefined success — for them, it’s less about being wealthy and more about achieving financial security so that they have the flexibility to pursue their passions. But they also understand there are no guarantees in life.

When we zoomed out on the data about our millennial clients, here are some common themes we found:

They’re realistic about the future

Living through the financial crisis taught the vast majority of clients (71%) to pay more attention to their finances.

“I saw that nothing is guaranteed,” explains Anna. “So as much as I love my job, love the work I do, and am grateful for the income and the lifestyle, I don’t take any of it for granted.”

It also taught our clients to be on the lookout for the next downturn: 71% of clients worry we’ll experience an economic recession within the next three years. The youngest subset of millennials (ages 18-24) is the least concerned, while the middle subset (ages 25-31) is the most concerned.

Yet despite their concerns, nearly 2 out of 3 say they’re personally on track to meet their financial goals. In fact, 3 out of 4 clients say they’re still willing to take financial risks. 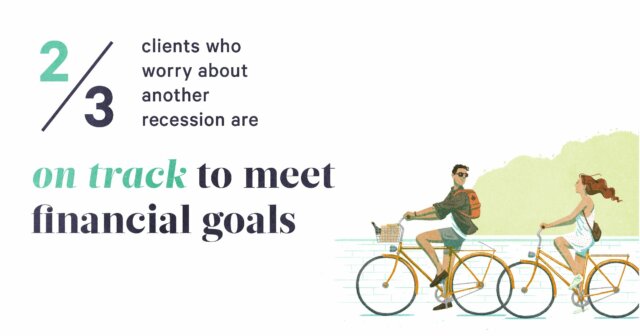 They’re ready for anything

Nearly all (81%) of those surveyed save money in an emergency fund, 71% don’t spend above their means, and 52% wait longer to make big purchases.

Wealthfront client Joyce Lee is a prime example. In 2009, she graduated in a tough job market and ended up moving home for five years. Eventually, she pivoted from education to pharmaceuticals, and now she and her husband have a house, retirement accounts, and an eight-month emergency fund. 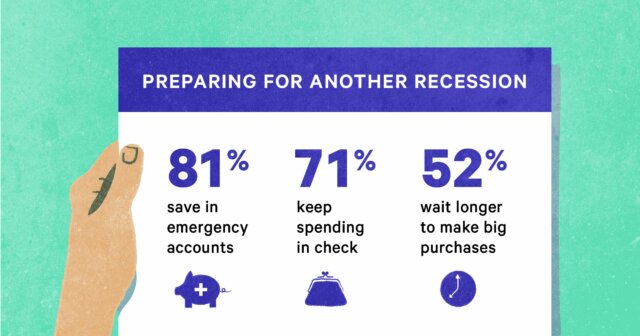 Despite entering a difficult job market, nearly all clients (87%) are proud of what they’ve accomplished so far.

“I came out of college and the entire economy was collapsing,” says Wealthfront client Kelly Sherman. In the two years following his 2007 graduation, he watched half his coworkers get laid off. But instead of becoming discouraged, he sought ways to continue advancing. “I figured something out that worked for me,” he says. “That’s been an important learning — no matter the circumstances, it’s still in your hands, and possible, to find those opportunities for yourself.”

Kelly isn’t the only one with high hopes for the future: 71% of our millennial clients believe they’ll be more successful than their parents. 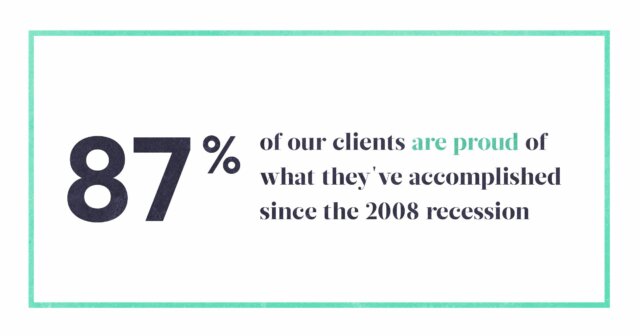 The kids are all right

Millennials get a hard time by the media for being the less ambitious generation, but not all of them are crashing with their parents and demanding avocado toast. Many of our clients came of professional age during one of the worst financial periods in modern history, but they’ve shown tremendous resilience. It was a rough start for them, but our data shows that these recession kids have weathered the storm and are confidently working towards a prosperous future.

We interviewed Wealthfront clients about their experience surviving the financial crisis of 2008 — how it shaped their professional and personal paths in life, their relationship with money, and their definition of success.

This blog is powered by Wealthfront Corporation (formerly known as Wealthfront Inc.). The information contained in this blog is provided for general informational purposes, and should not be construed as investment advice. Any links provided to other server sites are offered as a matter of convenience and are not intended to imply that Wealthfront Corporation endorses, sponsors, promotes and/or is affiliated with the owners of or participants in those sites, or endorses any information contained on those sites, unless expressly stated otherwise.

Wealthfront Corporation may from time to time publish content in this blog and/or on this site that has been created by affiliated or unaffiliated contributors. These contributors may include Wealthfront employees, other financial advisors, third-party authors who are paid a fee by Wealthfront, or other parties. Unless otherwise noted, the content of such posts does not necessarily represent the actual views or opinions of Wealthfront or any of its officers, directors, or employees. The opinions expressed by guest bloggers and/or blog interviewees are strictly their own and do not necessarily represent those of Wealthfront Corporation.