Building resilience in a down market

Markets will go up and markets will go down, but history has shown that long-run market returns are consistently positive. The key is sticking with passive investing and having the discipline to stay the course. To help with that, remember these three steps:

Investing in a diversified portfolio of low-cost index funds The mix of asset classes within your portfolio that are balanced according to your goals, risk tolerance and time horizon.
01

Accept that volatility is unavoidable

Volatility is an inevitable characteristic of our financial markets. While it's tempting to get emotional in a down market, we have a simple piece of advice: stay focused on the long term.

In data we trust

To illustrate the volatile nature of the financial markets, we examine the performance of the S&P 500, a commonly used index to track the US equities, which is one asset class of a diversified portfolio. Over the last 20 years, there have been 25 months where the index dropped more than 5%. But despite short-term losses, the overall performance of the index over the entire period has been positive. In fact, the annualized return is 6.3% per year. 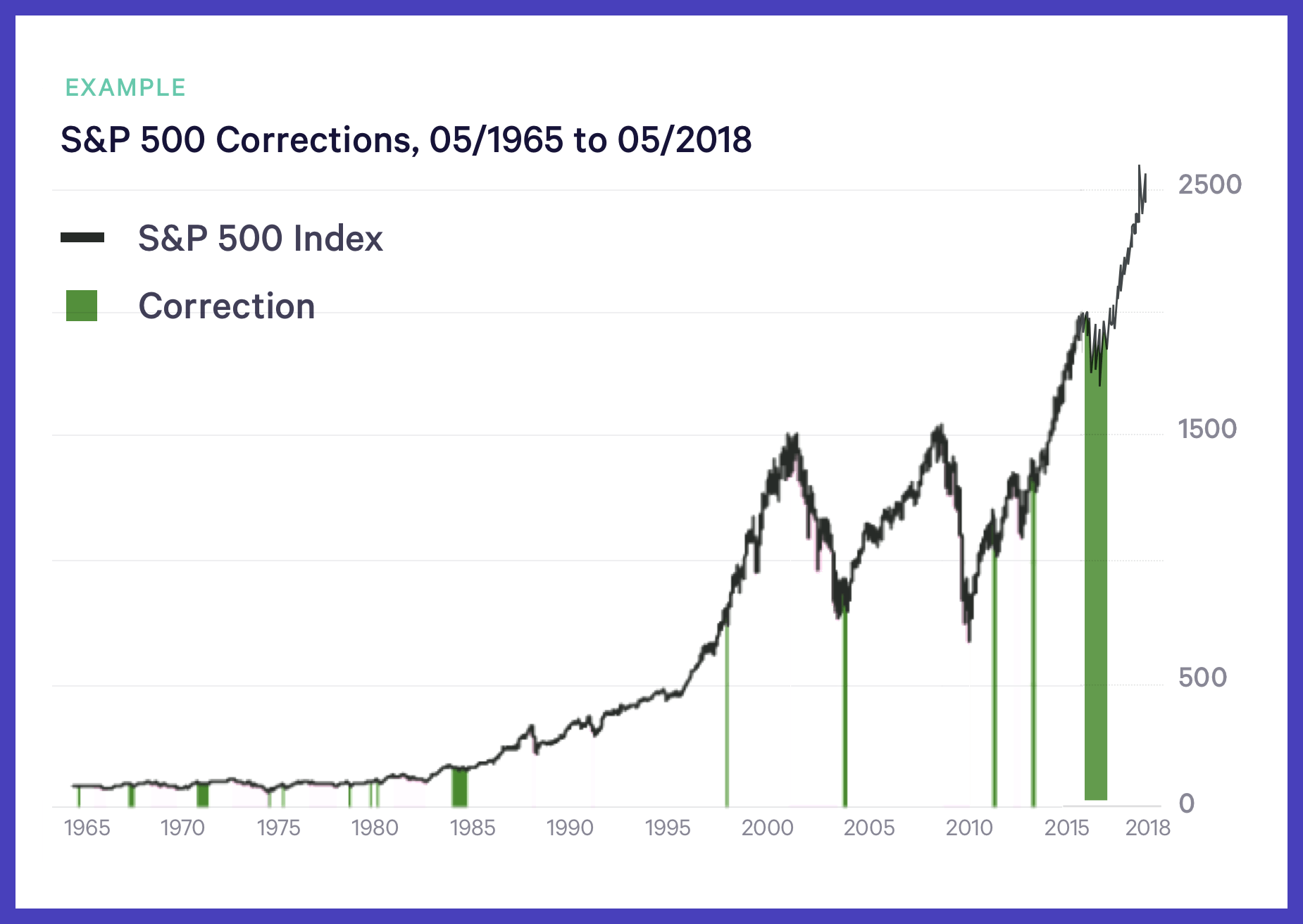 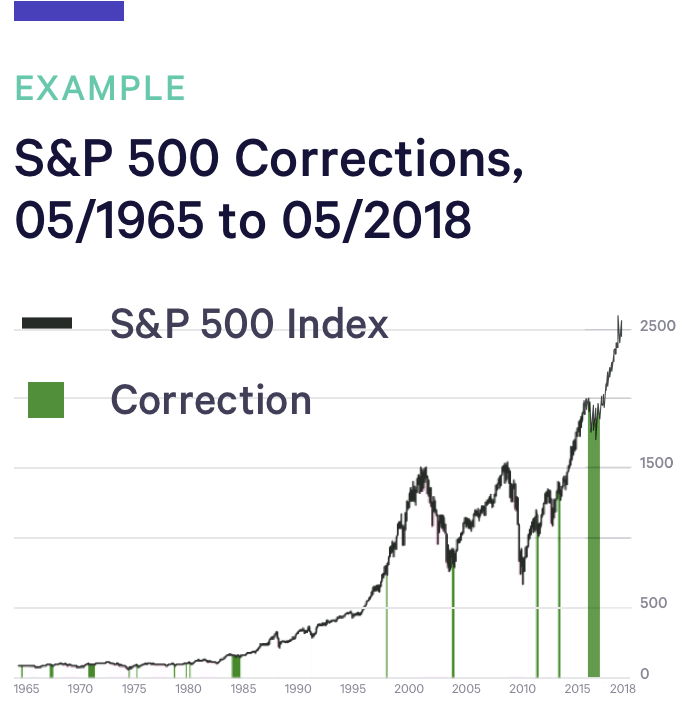 During a period of market decline, it's easy to let fear rule you and believe the market will never recover. However, not only will the market come back, but it will do so a lot sooner than you might think. Over the past 50 years there have only been 16 market corrections (defined as a drop of at least 10%), and the data shows that the average time for economic recovery was just 121 days.

Sound Investing When Markets Are in Turmoil

Stock Market Corrections: Not As Scary As You Think 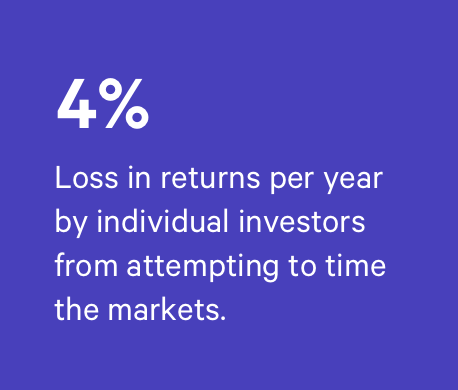 Set it and forget it with passive investing

In the face of market turmoil, it's natural to want to get out of the market or just sit on the sidelines. But in reality, that's not the right thing to do. In fact, our Chief Investment Officer Burt Malkiel refers to trying to time the market as an "investors' most serious mistake."

Stay invested during the dip

While it might seem counterintuitive to keep your money invested when there's volatility in the markets, playing the long game will pay off.

But what if you hadn't touched your investment? Ten and a half years later, you would have seen a 130% return, meaning your money would be worth $230,000 today — a difference of $107,000*. Which outcome sounds better?

The answer is passive investing

For long-term savings, we recommend passive investing, which means investing in a diversified portfolio of low-cost index funds. This strategy builds on the assumption that markets will grow over the long term, which is a safe assumption since global economies have consistently increased in value over the last several decades. And this trend is expected to continue.

Since periodic turmoil in the financial markets is bound to happen, diversification is the key to long-term investing. In any given year one asset class may rise and another may fall. So by investing across asset classes you can insulate yourself — to some extent — from the losses, while tracking the broad performance of the overall markets.

Don't Let Fear Get in the Way 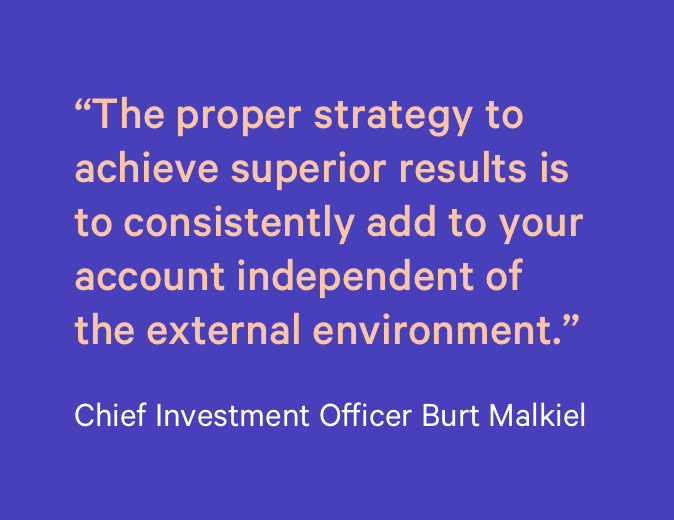 When it comes to investment decisions, choose strategies that leave emotion and human judgment at the door. In addition to passive investing, these optimization strategies can help you stay disciplined ‐ and ahead ‐ amid distracting market fluctuations:

Dollar cost averaging, or investing a fixed amount on a regular schedule, keeps you committed to investing despite market conditions. An advantage of this strategy is that the same amount of money can buy you more shares when prices are low and fewer shares when prices are high. As a result, you can actually end up better off in a volatile market than in a market where prices steadily rise. To implement dollar cost averaging, set up a repeating deposit to your investment account.

During the first decade of the 2000s, US stock market investors found that their portfolios at the end of the decade were worth exactly the same as they were at the start. But suppose the investor had diversified across asset classes and regularly rebalanced? That same portfolio would have almost doubled in value. 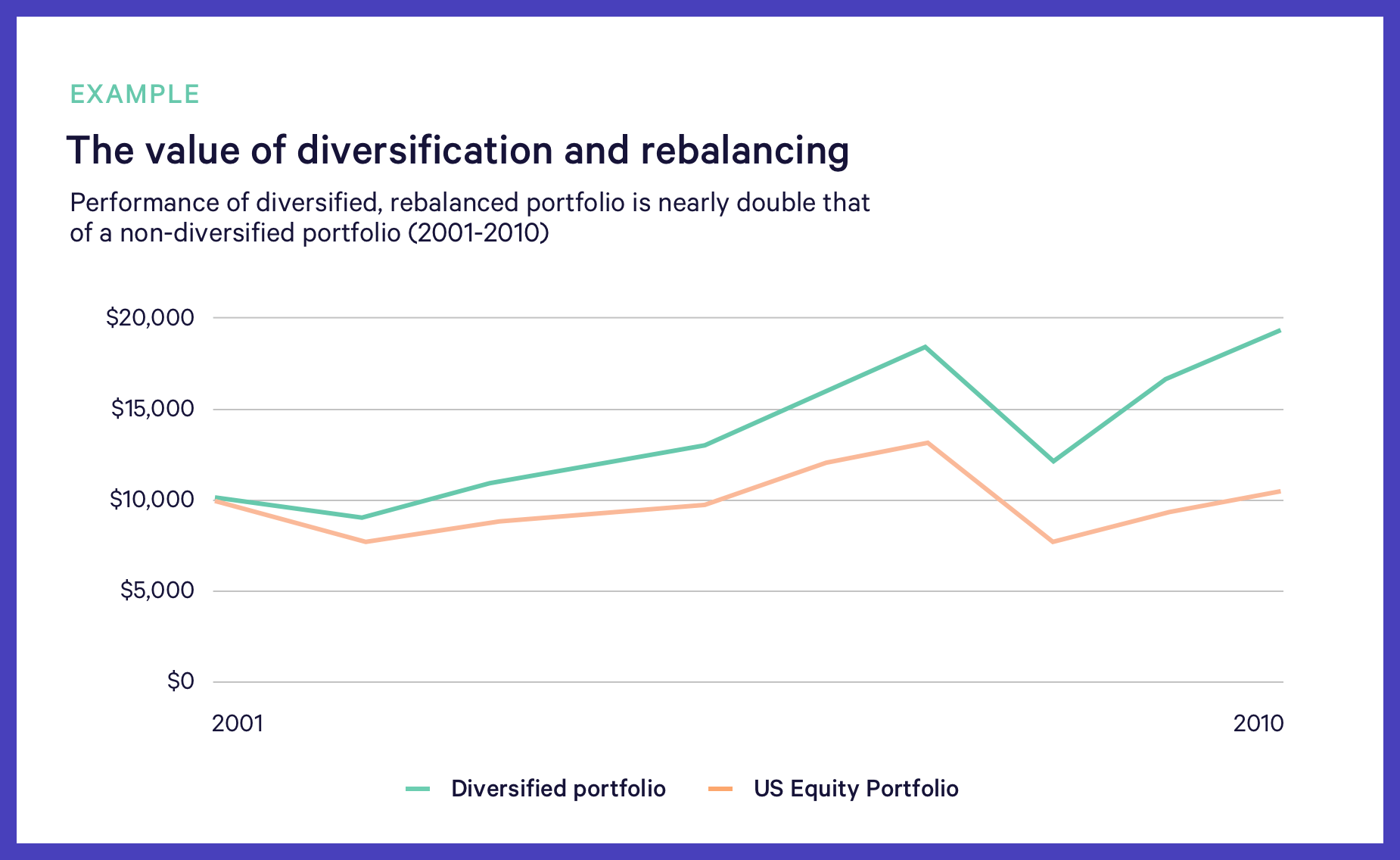 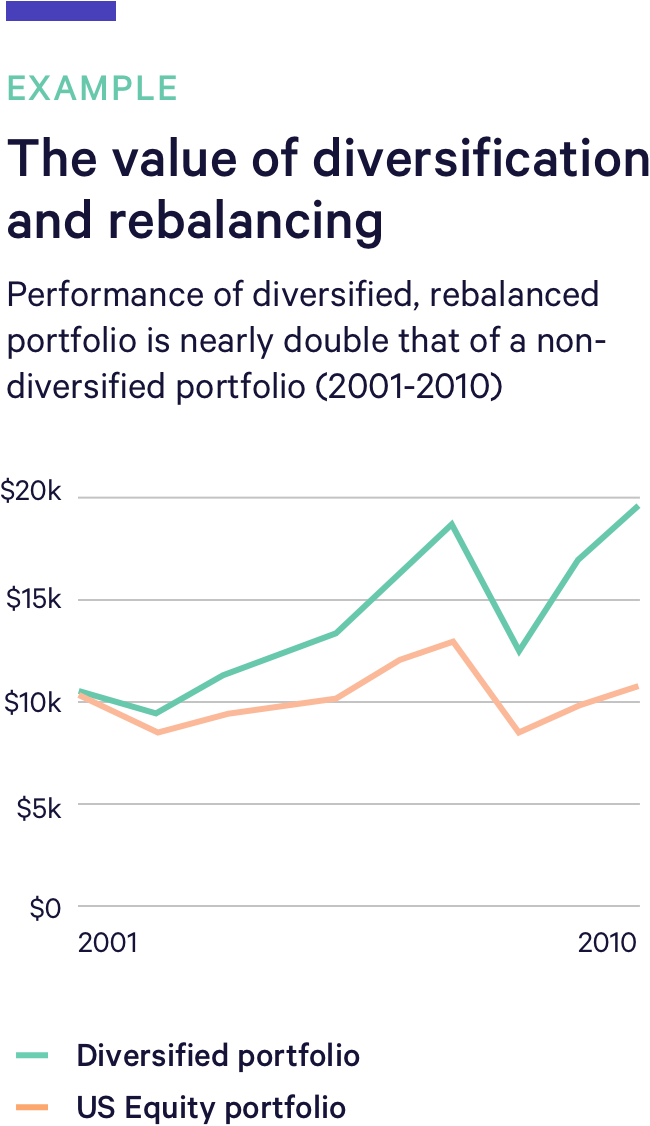 This technique can lessen the pain of weathering down markets. Tax-Loss Harvesting takes advantage of investments that have declined in value, which is a common occurrence in broadly diversified investment portfolios. By selling such investments and replacing them with highly correlated investments, you can capture tax losses without changing the risk and return characteristics of your portfolio. These recognized losses can be used to reduce your taxes. To see the real life impact of this strategy, read the published results of our tax-loss harvesting strategy.

Sound Investing When Markets are in Turmoil

The Real Value of Tax-Loss Harvesting

TO SUM IT UP

Being an investor means experiencing volatility in the markets. Don't let fear of down markets push you to be hasty. Trust passive investing, keep your eyes on the long term, and stay disciplined with optimization strategies.

Dive into another question →

Passive investing made easy with Wealthfront

And our software-only solution makes it all effortless for you. 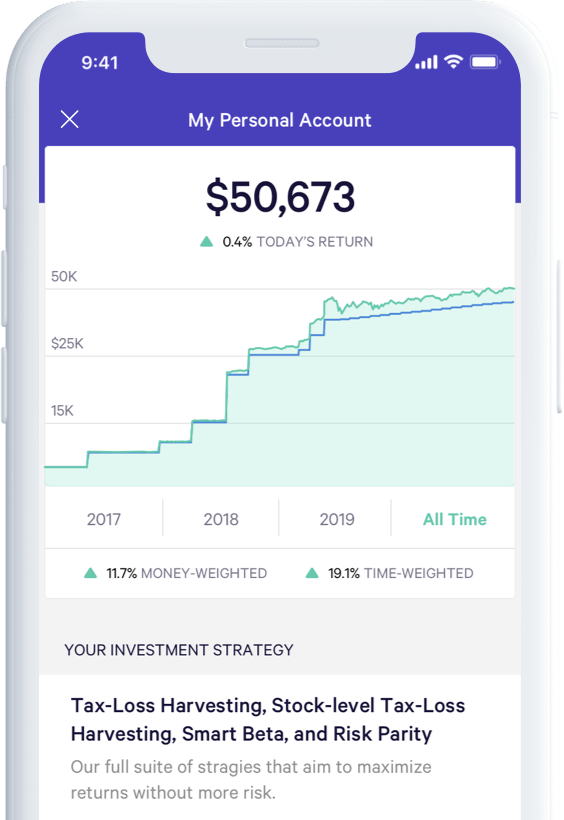